A client came to us with an idea for a piece of artwork he wanted to commission. The idea was to suspend an 8m long model of an Airbus A300, upside down at a specific angle 2m off the ground, with the model being displayed in an art gallery in LA. The client requested that the plane resemble an Airfix model of an Airbus A300 in its appearance while also being easy to assemble and disassemble.

An early rendering of the CAD model

The first part of this project was to obtain the 3D CAD data for the Airbus A300. This was then imported into our 3D CAD software SolidWorks by our design engineers. The plane then had to be divided up into its individual components, with the fuselage and wings being split into several parts for ease of fabrication. Many different manufacturing techniques were utilised in the production of the model, such as CNC milling, CNC turning, hot wire cutting, fibre-glass moulding, laser cutting and welding.

The fuselage beginning to take shape

Once the plane model had been split it was then modified so that it resembled an Airfix Airbus A300 model. The client specified the angle at which the plane would sit at when suspended, which was then mimicked in the SolidWorks model. From here the stand and support structure for the plane model was designed from aluminium tubing, utilising its strength and lightweight capabilities.

The first parts of the plane to be manufactured were the wings; these were made from polystyrene and hot wire cut to shape, and faced with obeche veneer. The fuselage was also manufactured in the same way but in 4 sections from Polystyrene, hot wire cut and faced in veneer. The nose and tail was CNC machined from foam. The windows for the plane were CNC machined from ureol (model making board) blocks that were placed into cut-out segments of the fuselage. This was done by importing the 3D CAD data from SolidWorks into our CAM software Delcam PowerMill, then machining the parts in one of our CNC machine centres.

The entire fuselage, including the tail and nose, were joined to create 4 fixed sections of the plane; these 4 sections were then individually fibre-glass moulded to produce a hollow fibre glass fuselage. The engines, wheels, wing tips and other components were then manufactured using CNC machining.

The aluminium stand and support structure was designed in SolidWorks alongside the plane model. The brief necessitated the stand to be lightweight and structurally sound, while also needing to be aesthetically pleasing from an artistic point of view as several parts of the stand were on show while supporting the model. Once the 3D CAD model of the stand was complete, individual engineering drawings for each component had to be produced. Then using our CNC milling and CNC lathes as well as laser cutting the parts were ready to manufacture with several needing to be welded together.

With the plane model going to an art gallery in Los Angeles one main consideration throughout the design process was ease of assembly. Due to it being such a big model (length 8m, width 6.5m and height 3m) the aluminium frame work had to be integrated into the plane model with careful consideration for the order of assembly, making it as simple as possible without compromising the design. To match an Airfix Airbus A300 model the entire plane was painted white, with the exception of the aluminium stand, which was left as bare metal.

Once the plane was manufactured, and assembled on site to make sure the finished product was up to our high standards, the plane was broken down and securely fastened inside the shipping containers in which it would be transported across the Atlantic Ocean. Our engineers then travelled with it to Los Angeles to ensure it was correctly assembled, and to perform any final touches to ensure the model was up to our high standards.

The client was very happy with the final presentation of the sculpture and our commitment to design and create an excellent finished product. Working with limitations to the space a model can occupy shows how we deal with circumstances and can overcome adversity while achieving the task at hand, and being able to modify the designs with consideration to the client’s wishes allowed us to streamline the project from the design stage.

To see this model being assembled, watch the video: 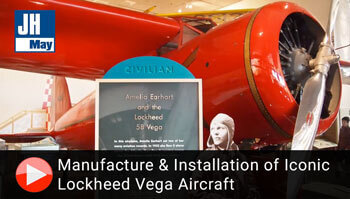 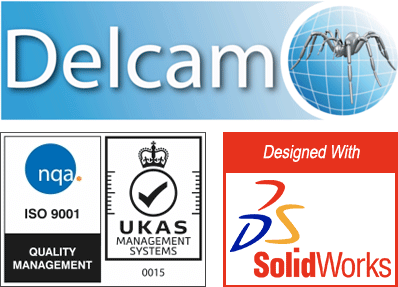 This website uses cookies to improve your experience. We'll assume you're ok with this, but you can opt-out if you wish.AcceptReject
Manage consent